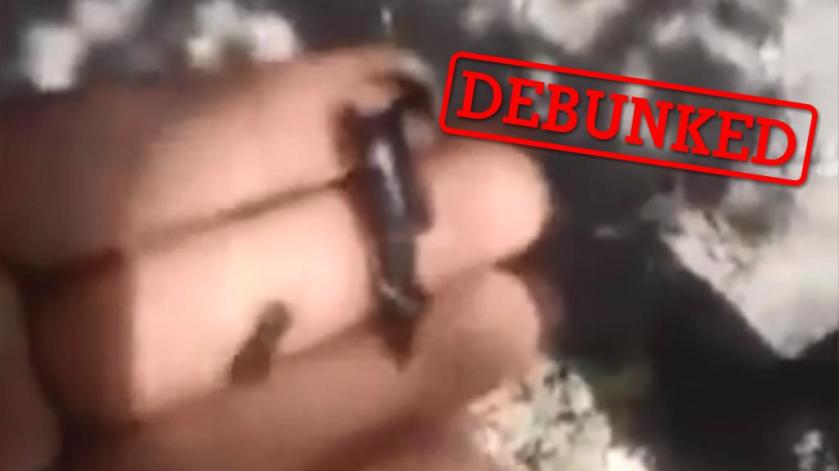 A video widely shared in Iran starting in late August 2018 shows a man removing what he says is an electronic listening device from a tree in Tehran. In fact, the device is a digital tag installed by a software company to identify and protect trees.

In a video being widely shared in Iran, a man removes a plastic pin from the side of a tree, shows the electronics inside it, and warns his fellow citizens that the Iranian government is planting listening devices in their trees. It’s not true: the “bugs” are digital ID tags designed to catalogue and protect the trees.

The 27-second video shows a man removing a 4-centimetre plastic cylinder from a tree and displaying the electronic device it contained. He says: “Iran’s authorities have installed bugs in the trees in the streets to listen what people say. If you find one, destroy it.”

The video was shared on hundreds of channels and groups on Telegram, a messaging service very popular in Iran, starting in late August. Several channels with millions of followers shared the video with this message: “Trees are bugged, watch out!”

In a country where many people believe the government engages in widespread surveillance of its citizens, the video provoked angry reactions – and calls to remove the “bugs”. 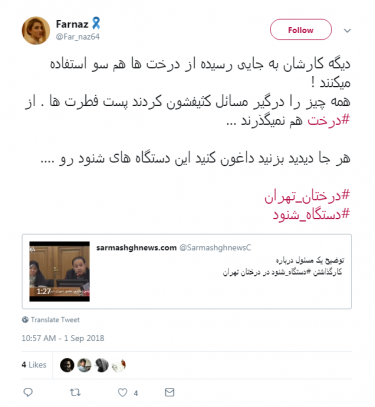 Translation: “They have no shame! They even abuse trees, the bastards. Anywhere you see the bugs, break them!”

Translation: “We were in a park when a boy took something out of a tree and told it was a bug. It had a long wire. He took three of them out.”

But other users, including environmental activists, pointed out that the devices were in fact electronic IDs designed to protect the trees, and begged people not to remove them.

Please please please, these are not bugs! Please do not take them out of the trees. Taking them out can put the tree in mortal danger of being cut down illegally.

Sourena Software is an Iranian start-up that provides digital identification tags for trees. Their clients include many cities across Iran, including Tehran. Spokesperson Mahdi Asl told France 24 the company installed 1.5 million digital IDs in trees in Tehran between 2008 and 2012.

Tehran’s trees used to have traditional metal tags as their ID. But gathering information was very hard. So 10 years ago we began to install digital IDs for the trees in many of Tehran’s districts. We use what is standard practice around the world: electronic tags using RFID [radio-frequency identification]. There’s nothing secret about it.

The small digital chips inside the tags use the same technology as chips inside bank cards, for example. They don’t have a battery inside, let alone a microphone. They cannot gather any kind of information.

The RFID tags allow our inspection teams to input information about the trees’ location and condition, and then update the information on subsequent visits if they see for instance that the tree is showing signs of disease. By monitoring the data, the city’s authorities can provide better care of the trees and deter illegal cutting.

This rumor not only is ridiculous, but also damaging to the trees. The tags are installed deep inside the tree, so people who take them out have to carve into the tree and damage it. It can even kill the tree. Furthermore, it costs money to replace the tags. I beg people – please do not damage the trees, and do not remove the tags. It makes it easier for people who want to cut the trees down illegally.

Why are so many Iranians ready to believe their trees are bugged?

Ali Fathei is an Iranian documentary filmmaker based in France. He says that state-run media actively promote the idea that the government is watching its citizens.

“Why would so many Iranians believe something that’s so obviously false? It doesn’t make any sense. How could random recordings in the street be of any use? It would require armies of spies to listen. But there’s a reason so many Iranians are ready to believe such a stupid story – it’s because there’s a widespread perception in Iran that the police listen to citizens’ phone calls and have spies everywhere. And it’s an image that the police themselves try to promote.

Back in the year 2000, Iran’s national police force created a film-production company called Naji Honar. Today almost all the detective series and movies that you see on state TV are produced or co-produced by Naji Honar.

Originally, they just wanted to make “film noir” movies that gave a good image of Iran’s police. But after the Green Movement protests in 2009, they changed the focus. Since then, crime series on TV stress that the police are watching. They want to share the idea that “we control everything, we can hear anyone anywhere; we can see you not only in public spaces, even in your own home.”

The series promotes the idea that the police and the intelligence services don’t just target individuals, but that they use mass surveillance to monitor ordinary citizens.