In the hours after Iranian-born Nasim Aghdam’s shooting attack on the YouTube headquarters, when she wounded three people and killed herself, figures from the pro-Trump alt-right in the US were quick to associate her with radical Islam. But in fact, her own posts suggest she was critical of radical Islam, skeptical of Iran’s religious regime and not a Muslim herself.

Aghdam’s Instagram and Facebook accounts were taken down soon after the attack, although her Telegram channel (in Persian) was still online on Wednesday. But conservative commentators managed to make framegrabs of many of her posts.

Laura Loomer, a 24-year-old right-wing activist with 138,000 followers on Twitter, tweeted a screenshot of a video Aghdam had posted on Instagram, saying it suggested she was an “Iranian terrorist… making an #ISIS salute.” There’s no trace of Aghdam saying anything about the Islamic State group organisation.

In fact, Aghdam is mocking radical Islam in her Instagram post. Loomer, who describes herself as an investigative journalist, quotes the first line of Aghdam’s caption, “Do I look good in hijab!”, but does not translate the rest of her text, which includes the hashtags in Persian “#compulsory_hijab” “Saudi Arabia.”, suggesting that she is critical of compulsory hijab for women.

Aghdam had written a blog post and pulished two videos (and wrote extensively) about the Bahai religion, whose followers suffer persecution in many Muslim countries. The website Interfaith Vegan Alliance described her in her bio as a “Bahai activist”.

The last photos that Aghdam published on her Telegram channel, her only social media account still online Wednesday, showed her with bare arms, clearly not Islamic hijab.

Jacob Wohl, the 20-year-old editor of alt-right publication The Washington Reporter, tweeted two other images Aghdam had posted. In one Tweet he called her an “Arab woman”; in fact she was born in Iran, which is not an Arab country. 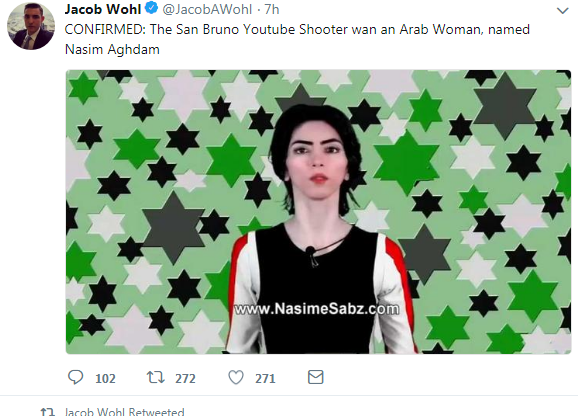 In another tweet, Wohl posted an image Aghdam had made showing herself in a stylised military uniform. He said she “bragged about serving in the Iranian Military”. She had written, “When I was commander of commandos in Iran-Iraq war” – and this was clearly ironic given that she was nine years old when the 1980-88 war finished, and Iran did not send female soldiers to the front.

Other social media users shared a conspiracy theory that Mashable, the US-based news and tech site, altered the colour of Aghdam’s eyes and skin colour “to make her look white”. In fact Aghdam had posted retouched versions of her photos herself. 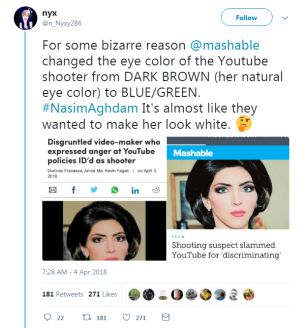 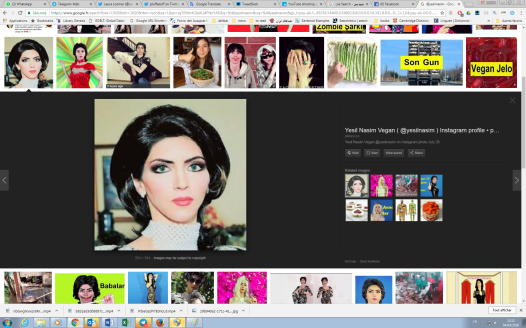