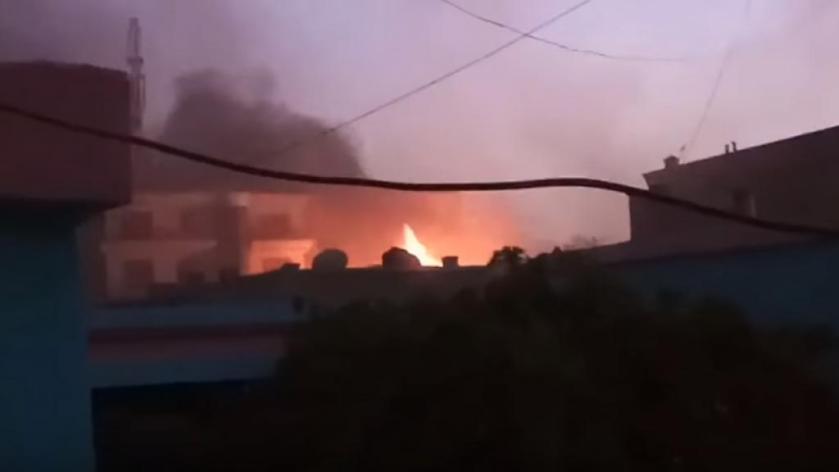 People who have fled the city of Ghazni, Afghanistan, have described apocalyptic scenes, including dead bodies on the streets, the horrible smell of corpses, a helicopter shot out of the sky and smoke everywhere. Ghazni, 150 kilometres southwest of Kabul, has been under attack from the Taliban since Thursday. We spoke to a resident who managed to escape.

Just five years ago, Ghazni, which has a population of about 150,000, was chosen by Islamic countries to be the 2013 “Islamic Cultural Capital”. But since then, times have been rough: the city has been attacked by the Taliban four times. The latest attack began in the early hours of Friday; according to people who managed to escape, the Taliban now control about 80 percent of Ghazni.

This video shows Taliban fighters in vehicles they took from the Afghan army.

There were corpses abandoned in the street”

Yassan is a young freelance journalist who lives in Ghazni. She managed to escape the city with her family on Sunday.

“It was about 1am on Friday morning when we heard the sound of clashes. We’re used to the sounds of blasts, since there are sporadic clashes with the Taliban near our city. So at first, we weren’t worried. But after a while, the sounds drew nearer and we went to hide in our basement. The electricity got cut off. In the morning, we understood that the Taliban had infiltrated the city. They alerted people through the mosques’ speakers to stay home – and that if this was disobeyed, they considered themselves authorised to kill people.”

Buildings on fire in Ghazni

“There was some resistance by the army, but they kept losing ground. At about noon on Friday, our phone lines were cut, so we no longer knew which parts of the city were occupied or whether or not our friends and relatives were OK.

At about 5pm, we decided to leave our house on foot because the clashes were getting too close to our house. We had no idea which areas were safe so we tried to get to a friend’s house, but we quickly realized that this was impossible: his neighbourhood was occupied by the Taliban, and they were firing rockets from there. We rushed back to our house.”

Buildings on fire in Ghazni.

“Since we left Ghazni, we’ve had no news from our family and friends”

“All day Saturday, we didn’t leave our house. But on Sunday afternoon, when the army took back our neighbourhood for a few hours, we decided to leave the city by car. The army soldiers were leading people from alley to alley, then village to village, through abandoned roads and out of the besieged zone.

What we saw on our way out was horrible. Building were on fire – mostly government buildings. There were corpses abandoned in the street. Those who didn’t have cars were trying to escape by foot.”

Taliban fighers in the streets of Ghazni.

“I can’t estimate exactly, but I think that more than 80 percent of the city was occupied by the Taliban.

We found it very strange that we did not see any backup security forces on the road out of Ghazni.

Since we left Ghazni, we’ve had no news from our family or friends stuck in the city. We’re very worried about them because they are confined to their houses and must be running out of food. Our hospitals don’t have a lot of medecines stocked.”

Despite the worrying reports from Yassan and other witnesses who fled Ghazni, the Afghan government claims that the army controls most of the city. On Monday, the Afghan defense minister claimed that 100 soldiers and 30 civilians were killed. However, many Afghan media outlets have suggested that the government’s figures are not reliable. The manager of one of Ghazni’s hospitals told a reporter on Sunday that “we have 113 dead and 142 injured”.

On social media, many Afghans criticised the government’s in ability to protect Ghazni and called for sending in reinforcements. On Monday, the army said it had dispatched 2,000 soldiers to the city.

The Taliban currently controls more than 45 percent of Afghanistan, and regularly attack cities despite ongoing peace negotiations with the Afghan and United States governments.

The US media recently revealed that the United States had even freed the Afghan drug kingpin Haji Juma Khan, who funded the Taliban, after ten years of confinement.

Despite ongoing fighting in Afghanistan – and the Taliban controlling nearly half the country – coverage of this conflict by the international media is today sparse, and many European countries are now deporting Afghan asylum refugee seekers back to their country.