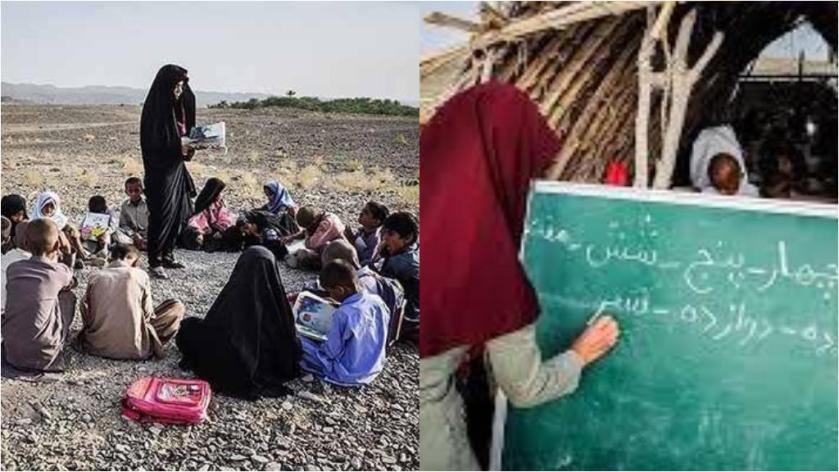 Iran, like many other countries hit by the COVID-19 outbreak, has closed schools and universities and prioritized online learning. But in a country where there is widespread poverty and some regions have no internet coverage at all, some students are locked out of virtual classrooms. A teacher who works in a poor neighborhood in Iran told me that he hasn’t been able to get in contact with two-thirds of his students since schools closed.

On 10 March, Iran’s Ministry of Education announced the closure of all schools and universities to slow the spread of the novel coronavirus. Iran has been one of the countries hardest-hit by the virus.

On 4 April, Iran officially kicked off its national distance learning project. The Ministry of Education launched “SHAD”: an Iranian application that students have to sign up for in order to attend virtual classes with their classmates and teachers.

Previously, many Iranian teachers had been using Telegram or WhatsApp, two popular apps among Iranians, to reach their students. However, the authorities have banned teachers from using any foreign-based app for educational purposes.

Children must download the SHAD app (which only works with the latest version of Android phones), enter their national identity number, choose their school and their class and then join their classmates and teachers to follow lessons in the virtual classrooms.

There are more than 14.5 million students in Iran. According to our Observers and people who shared their experiences on social media, the work-from-home platform doesn’t work as it should: there are frequent errors, a complicated interface, and a painfully slow platform where simply “transferring a short voice message takes a long time”, according to our Observers in Iran.

This user explains that even signing up to the SHAD platform is very complicated and people often get error messages during the first steps of signing up.

The main problem for distance learning in Iran is not that the application isn’t user-friendly enough.

While Iran’s Education Minister claimed only 7 percent of Iranian students have no internet access, according to the latest survey by The Statistical Centre of Iran in 2017, 28% of Iranians had no or limited internet access. About 80% of Iranian internet users live in cities and around 20% in rural areas. The Director-General of Education Ministry of Sistan and Baluchestan Province – a poor province in south-east Iran that shares a border with Afghanistan and Pakistan – said that only up to 40% of students in the province had access to the internet.

Translation: “They have no internet, no social media, so their teacher continues to teach them while trying to observe the precautionary measures, in order to give them a bright future.” The photo was taken in a village near Meshgin Shahr, northwestern Iran.

However, according to our Observers in Iran and even lots of Iranian media, poverty is the principal problem for distance learning in the country. According to Iran’s parliamentary research center, between 40 and 55% of Iranians live under the poverty line.

These kids don’t even have a simple blackboard or a classroom. How can you be talking about the internet?” This video was shared from a school in Sistan and Baluchestan Province in Iran.

Farzad is a teacher in Kashan, a city in Isfahan province in central Iran. He works in a public school located in a poor neighborhood of the city, with many Afghan migrants in his class. He explains that even in regions that do have good internet coverage, many families cannot afford to pay for an internet connection and cannot attend the virtual lessons.

“The first thing you need to sign up for the virtual classes is a smartphone. In the neighborhood where our school is located, there are many people who have old mobile phones. Because of this problem, I’ve had absolutely no contact with 10 of my students [about one third of his classroom] since the beginning of the lockdown in Iran.

On the other hand, there are families who have smartphones at home but they don’t have an internet connection or only have very limited access to the internet. For many families here, the internet is a luxury that they cannot afford. I know they’re poor so I can’t force them to buy more internet packages, otherwise, they would have to cut some other essential goods from their family expenses. One-third of my students can’t afford the cost of the internet.”

A broadband connection in Iran costs about 9.20 euros per month, while the minimum monthly salary is equivalent to 110 euros, meaning an internet connection would represent about 8% of their monthly income. A broadband connection in France costs, on average, about 25.50 euros, while the minimum wage is about 1,219 euros per month, meaning the internet costs about 2% of the income of a person on minimum wage.

In this second video from Sistan and Baluchestan Province, a student says: “Look, we have nothing. We don’t have benches, chairs or a decent blackboard here

Farzad, our Observer in Iran, continues:

“Even with the students that I’m in connection with, what we have is not a virtual classroom because it is impossible to assemble all the students at the same time, because most of them only have one smartphone at home and it belongs to their father, mother or siblings and the whole family has to share it. So I just send them up to four hours of content and exercises every day, then when they do get access to a smartphone they can do them.

I compare them to my family’s or friends’ kids, where each child has their own tablet. This system built by the authorities is designed for students who come from middle- or upper-class families in Iran.

The poorest children in my classroom are from single-parent families; they’re Afghan migrants or their parents are drug addicts. The parents of students who are in a better situation are mostly workers in factories or seasonal workers.

I’ve complained about this inequality on many occasions, but the only answer I received from the school management was, “If these students don’t have access to virtual classes, they can still follow their lessons through the TV”. Some Iranian state TV channels are broadcasting school classes every day. I watched these classes on TV. They are very old-fashioned and use a method that our students are not familiar with. And what’s more, my Afghan immigrant students don’t even a TV set at home.” 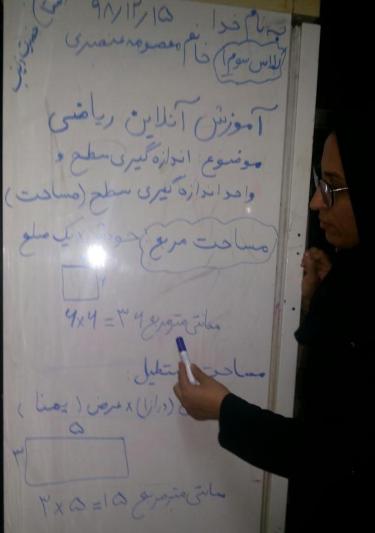 A teacher in Hamidiyeh [a poor town in Khuzestan Province in south-west Iran] uses her fridge to teach her students.

Two weeks after Iran’s Ministry of Education launched the SHAD project, the number of users on the platform has remained low, according to an official report. Only 24.6% of Iranian students and around 50% of Iranian teachers have signed up to the platform.

SHAD even has its critics within Iran’s parliament. On 18 April, Hossein Mohammad Salehi, an Iranian MP from a rural region in Isfahan Province, told an Iranian media, “People in my constituency don’t have decent roads, they don’t even get TV reception, let alone the internet. The education ministry has to provide access to classes for everyone or they must end this unequal system.”