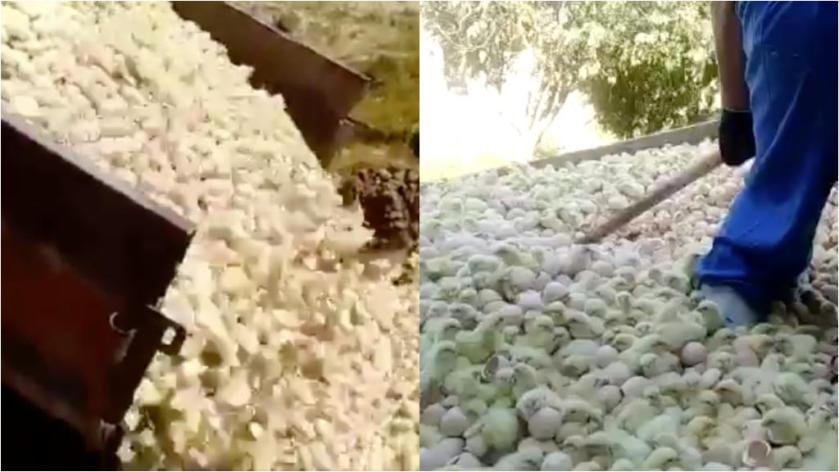 People across Iran have been shocked by grisly videos posted online in mid-April that show chicken farmers burying thousands of baby chicks alive. While the videos led to a massive outcry, one farmer told me why the economic crisis caused by Covid-19 left many of his fellow farmers with no choice.

WARNING: SOME READERS MAY FIND THE FOLLOWING FOOTAGE SHOCKING

Thousands of chicks became the latest collateral damage of the Covid-19 epidemic that is sweeping Iran. At least 6,277 people in Iran have died of the virus and 98,647 have fallen ill, according to official statistics announced on May 4. However, many medical staff working in Iran, as well as international NGOs, have cast doubt on these numbers, claiming that they are in reality much higher.

A dozen or so upsetting videos posted online show farmers tossing newborn chicks into plastic sacks. Most of the baby animals seem to be alive, judging from their peeping. People across Iran reacted in horror to these videos and the methods used by the farmers.

“They are killing these chicks to increase the market price and to get more money,” wrote one Twitter user. “There is nothing viler than human beings.”

No official estimate of the number of chicks killed over the last week in Iran has been released, however, the Iranian Association of Poultry Farmers reacted to the scandal on April 18 by banning farmers from killing poultry for economic reasons.

However, the France 24 Observers spoke to one poultry farmer who said that he and his fellow farmers were faced with a stark choice– either fire their workers and temporarily close their farms or cull some of their flock.

“[It’s] an economic mafia– in the midst of a pandemic and an economic crisis, they kill these chickens in mass to increase the price,” alleges the man who posted this video. He cites the name of one farm where he says that 232,000 chicks were killed over a period of two days.

Kaveh (not his real name) owns a small poultry farm in northern Iran. Luckily, there is still demand for his poultry from local markets, so he hasn’t culled any chicks. However, he said that he has lost revenue.

“This is the first time in my life that I’ve heard of Iranian farmers who have to get rid of their stock. In general, chicken farmers follow a strict calendar that is dictated by the market. They need to know the number of birds that the market will need at least 40 days in advance [Editor’s note: That’s how long it takes for a chick to be hatched, grow up, and be sent to the slaughterhouse]. Any obstacle that gets in the way of this system and schedule can lead to economic losses.

At the moment, there are problems at all different stages of the production system. In Iran, 90% of chicken feed is imported. The pandemic has slowed production in countries like China and has also led to transportation issues. Chicken feed has actually become a rare commodity, which is particularly problematic for large poultry farms.

“They are killing chickens to regulate the market,” says this social media user.

According to the Statistical Centre for Iran, the average market price for chickens in January, just before the start of the Covid-19 pandemic, was 12,800 tomans per kilo, or 77 euro cents. By April, the price had fallen to 9,500 tomans, equivalent to 57 euro cents, a decrease of nearly 25%.

“No one knows what will happen in the next 40 days”

“We are in the middle of a pandemic. The restaurants, the fast-food chains, even the prisons who were our customers are no longer buying. The main importers of our products, Iraq, Afghanistan, and Qatar, aren’t buying either. What are we supposed to do? Feed the chicks until they weigh between 1.2 and 1.8 kilos, which is the market standard? Only to never sell them?”

This farmer in Urmia, which is located in northwestern Iran, is protesting in front of the governor’s office because he doesn’t have anything left to feed his chickens.

Lots of my fellow farmers have already killed their chicks. Faced with the choice of either killing them or spending the money to feed them for 40 days, only to then have to sell them for next to nothing, most of them decided to kill them.”

This video shows farmers destroying their eggs so they don’t get too many chicks.

“Of course, this footage is just horrible. They could use a much less painful method to kill the animals. But these farmers have to choose between letting their employees go or killing these chicks.”

Many people on social media didn’t buy the economic arguments made by the farmers and reacted angrily on Twitter or Telegram. “They could give these chicks to poor families who could feed and raise them themselves and then eat them later,” one commented. Another suggested that the chickens should be “set free so that they can participate in the natural cycle and be eaten by predators.”

Kaveh responded to this criticism:

“Before judging, you need to know what you are talking about. Lots of zoonotic diseases [Editor’s note: diseases that can be transmitted from animals to humans] can be transmitted from chickens to humans. Giving these chickens away could cause another health crisis in addition to the one we are already experiencing. These chickens need to be vaccinated first, and that costs money. And chicks need special care. Around 90% of them would die in the first few days if we just gave them away.

There are similar reasons for why we can’t just let these animals go wild. They might spread diseases to other animals, including Newcastle disease [Editor’s note: a disease that causes digestive problems and listlessness in chickens.] This could kill a variety of species in nature.”

The videos of farmers slaughtering chicks ended up having an impact. On April 19, President Hassan Rohani ordered the Minister of Intelligence Mahmoud Alavi to identify and charge the farmers responsible for these mass killings.