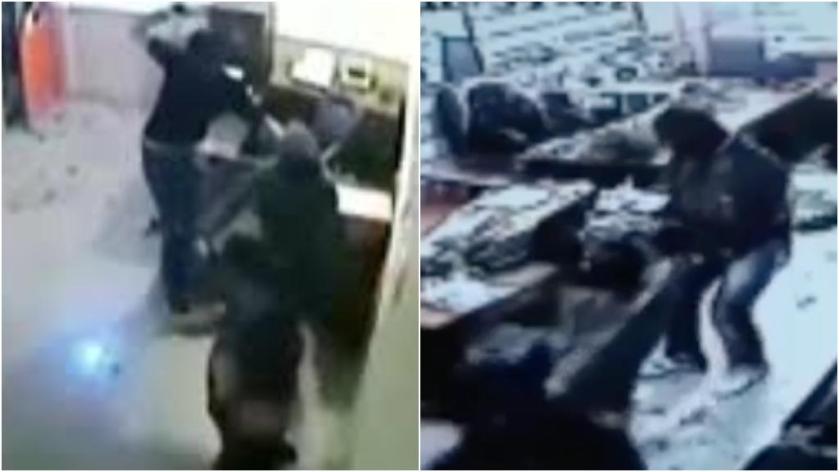 Iran’s Supreme Court announced on July 10 that three men who had participated in protests against the government last November had been sentenced to death. Many people took to social media to protest the announcement, calling for the sentence to be overturned. At the same time, ultra-conservative supporters of the regime started circulating a video that they claimed showed the young activists carrying out violent armed robberies in an attempt to turn public opinion against them. In reality, the footage in this video is old and has nothing to do with the three accused men.

UPDATED 20-07-2020: On July 19, the Iranian government suspended the execution of the three activists, Amirhossein Moradiyea, Saeed Tamjidi, and Mohammad Rajabi. The Iran Supreme Court accepted the request for a new trial that had been submitted by the defendants’ lawyers, Babak Paknia, one of the lawyers, informed AFP on Sunday.

Last November, an increase in petrol prices sparked a nationwide protest movement in Iran, with demonstrations taking place in more than 200 towns and cities. The regime’s crackdown was deadly, resulting in the death of close to 1,500 people, according to the Reuters news agency. At the time, the France 24 Observers team investigated these massacres.

Security forces also arrested hundreds of protesters. On July 10, the Iranian Supreme Court announced that they were handing down the death sentence to three of them– 25-year-old Amirhossein Moradi, 27-year-old Saeed Tamjidi, and 27-year-old Mohammad Rajabi. The men were sentenced to death for “participation in vandalism and arson with the intention of declaring war on the Islamic Republic of Iran.”

After the sentence was announced, many Iranians took to Twitter to organize support for the three young men– even though Twitter is supposed to be blocked in Iran. Since July 15, there have been more than 8.7 million tweets with the hashtag “No to execution” in Persian– or “نه به اعدام”.

But supporters of the Iranian regime also launched their own social media counter-offensive, sharing a video on July 16 meant to discredit the three activists. The video, which is about a minute long, was further circulated by “Afsaran”, a conservative platform that brings together followers of different extremist ideologies and reportedly has close links to Iran’s Revolutionary Guard Corps.

“They present armed robbers as innocent protestors, then refuse to execute them.”

The video is made up of a surveillance camera footage showing three separate violent robberies. The caption on the video for Twitter and Telegram says that the men in the video are the three activists who were sentenced to death. One conservative shared the video along with ironic use of the hashtag “No to execution,’ used by supporters of the three activists, and the caption “Don’t execute armed robbers.”

The France 24 Observers team verified this footage and determined that it was all filmed between 2011 and 2013. Some of this footage was even broadcast on Iranian TV at the time.

The first video shows two men armed with huge knives attacking people before handcuffing them (the action takes place between 10” and 49”).

This footage is from 2012 and shows the robbery of a petrol station in Tehran. Iranian media outlets reported that five people were arrested for the crime– none of them being the activists sentenced to death in 2020.

Second video: an attack in a jewelry store in Ispahan

The footage is of a second armed robbery, beginning 23 seconds into the video. It shows two armed men entering a jewelry store. They hit the manager and start to fill their bags with jewelry.

Iranian TV channel IRIB 3 broadcast this footage in a special report in 2013, which included an interview with one of the robbers. At the time, the men involved were all arrested and convicted of the crime.

In Iran, those convicted of armed robbery are usually given the death sentence, although the TV broadcast didn’t say if that was the case for this crime.

The robber interviewed in the broadcast is older. In contrast, when this crime occurred, the three activists Amirhossein Moradi, Saeed Tamjidi, and Mohammad Rajabi would have been in their very early twenties. Moreover, the robbery took place in Ispahan and not in Tehran, where the three men sentenced to death live.

In sum, it is impossible for the three activists to have carried out this robbery.

Third video: a former police officer and a martial arts champion
The last sequence in the video starts at 33 seconds. It shows a man being attacked by two other men, who are armed with a machete and a nunchaku– a traditional martial arts weapon.

The last sequence in the video starts at 33 seconds. It shows a man being attacked by two other men, who are armed with a machete and a nunchaku– a traditional martial arts weapon.

Once again, the footage is old– this incident took place in 2011. A year later, the gangs responsible for this armed robbery were arrested, according to state TV channel TV IRIB 3, which carried out an interview with the robbers.
Iranian media reported that the leader of the gang was a former police officer and one of their members was Asia’s former kickboxing champion. The three young men were not among those arrested for the crime.

“These videos have nothing to do with our clients,” says the lawyer of the men sentenced to death

Babak Paknia, the lawyer of the three activists, reacted to the circulation of this fake video in a tweet posted on July 16: “There hasn’t been a single allegation of armed robbery, rape, bombing or anything of the like against these young men. These videos have nothing to do with our clients.”

For the time being, Iranian authorities haven’t commented on the footage, though they did accuse the young men of stealing a cellphone.
In a statement published on July 14, Amnesty International denounced “an alarming rise in the use of the death penalty against protesters, dissidents, and members of minority groups in Iran,” adding that the three protesters “face execution after grossly unfair trials.”

The NGO has posted an online petition calling for the convictions and death sentences of the three protestors to be overturned.