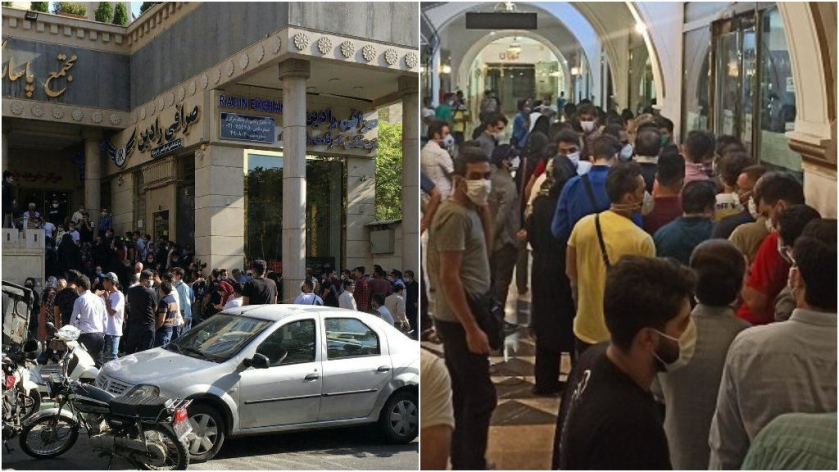 Videos of fights breaking out in front of supermarkets or currency exchange offices in Iran have become so common on social media over the past few years that many people don’t even find them surprising anymore.

These fraught scenes illustrate the stress caused by the economic downturn that has swept the country, accompanied by rampant inflation and currency devaluation. Experts and observers describe an unprecedented crisis that has led to violence and significant psychological distress amongst those fighting to stay afloat.

Every day, large crowds gather in front of currency exchange offices in the capital, Tehran, and other Iranian cities. The people in these queues are hoping to preserve their meager savings by converting them into US dollars, as their own currency rapidly devalues. Fights are common amongst those scrambling for a place in line.

The video below, shared on social media on September 8, is one example. It shows a man and a woman fighting in front of a currency exchange office in the Eskan commercial center in northern Tehran.

These incidents, which are frequently filmed and posted on social media, show just how fed up many Iranians are. The cost of living is rising every day, a result of both the poor economic management of the country as well as the economic sanctions imposed by the United States after Iran left the nuclear deal in May 2018. Inflation is rising while the Iranian currency, the toman, has lost more than seven times its value since 2017. In September 2020, a dollar was equivalent to roughly 28,000 toman.

For the past ten years, Shervin (not his real name) has been making a living importing computers and selling them in Tehran. He described the economic situation in the country, where the inflation rate is somewhere between 41 and 130%, according to wildly variant estimates:

We used to import merchandise from the United Arab Emirates and China. But since May 2018 and United States President Donald Trump’s decision to reinstate sanctions on Iran, we’ve become dependent on smuggling. However, this is expensive, so we have to sell the merchandise at increased prices.

The other problem that we encounter in my company is that we depend on economic activity to make a living. We sell tools for companies and their employees. When the economy is stalled, it is difficult to import and to export. The unemployment rate is high. People aren’t working much and they don’t need to buy a computer.

The devaluation of our currency against the dollar also affects our business. In the past, we bought computers or parts when the exchange rate was about 15,000 toman per dollar. We calculated our costs and profits from these rates. But later, when we wanted to buy the same products, the exchange rate had changed and the buying price increased.

We didn’t make enough on the products and, thus, lost money. As a result, we weren’t able to buy the same amount of merchandise.

“We sell products for five to seven times their real price”

Now, we always verify the exchange rate and have to increase the price as a result. Because the exchange rate can change very quickly, we try to avoid being caught unprepared and so we sell the products for five to seven times more than their real price. Moreover, there is very little competition in the market right now.

Importing is a difficult business and not many people do it. We know the other importers who survived the economic crisis. This allows us to know who is importing what and what each person has in stock.

If a person in Iran really needs a computer then they will buy it no matter what the price – even if it is three to four times more than the price in dollars– because there just aren’t any other options.

The cheapest system units that you can find in Iran cost about 15 million toman [Editor’s note: Equivalent to 476 euros. In France, the cheapest system units start at about 60 euro]. And it’s not just us. It works the same way whether you are selling pens or refrigerators. That’s why prices are skyrocketing. And since 2017, sales at my company have been plummeting. We are getting nearly a third less sales than we used to.

Saeed Madani is a well-known researcher in sociology in Iran. He told us about how the economic difficulties the country is facing are aggravating societal issues and affecting the mental health of those impacted.

Over the past few years, several universities have researched “anger” within the population and the violence that can sometimes stem from poverty and economic problems. These studies establish clear links between unemployment, a decrease in income and inflation and a rise in violence and crime.

According to the Iranian National Bank, 20% of Iranians live under the poverty line. Other independent studies have put the figure closer to 35 or 40%.

People here have become desperately poor. In years past, people were often facing deprivation on one front. For example, they might have a house but struggle to have enough to eat. Now, we are seeing people who are experiencing deprivation at all levels. They can’t pay rent or any of their bills and they don’t have any money for food or medical care.

Iran is also experiencing persistent, or generational, poverty. Studies have shown that now more than ever, when you are born into a poor family, you stay poor.

Moreover, the people living under the poverty line are actually working, but still not making enough to get by. In Iran, when someone makes less than 3.5 or 4 million toman per month? [Editor’s note: 111 to 126 euro], you can consider that they are living under the poverty line. However, many workers and government employees make minimum wage, which is 1.83 million toman per month? [Editor’s note: equivalent to 58 euro].

This explains the anger and violence growing within society. Iranians are trying to improve their situation, but the context is getting worse. They are angry about it and angry at society.

A rise in suicide is another horrible consequence of the worsening economic situation. Forty years ago in Iran, there were about 250 suicides per year. Today, there are around 5,000 per year. The numbers have really increased over the past decade. The suicide rate has risen to eight for every 100,000 residents. It’s nearly at the global rate, which is 9.8 per 100,000 people.

Another form of self-harm is addiction. Both addiction and depression are on the rise, sometimes triggered by people’s economic problems.

A study published in 2016 revealed that unemployment (in 16% of cases) and inflation (in 76% of cases) had had an impact on people involved with drug trafficking in Iran. [Editor’s note: according to official statistics, the number of addicts in Iran has doubled over the past nine years for a total of around three million people].

“People are fighting to not fall into poverty”

Other people blame those around them or society in general for their poverty and economic hardship. That explains the violence. When people are waiting in line to exchange their toman for dollars or buy subsidized products, fights break out because they see others as obstacles that could prevent them from improving their own daily existence. They aren’t trying to get rich. These are people from the middle class who are fighting to survive, to not fall under the poverty line. That’s why the fighting between them is so ferocious.

Other types of violence have also become common, including domestic violence and violence towards women, child abuse, and elder abuse. And we think the number of street fights has doubled in the past ten years.

According to the Iranian judicial system, about 50% of people arrested for small-scale theft over the past ten months didn’t have a criminal record. They did it because of the current economic climate and it is a completely new phenomenon in Iran [Editor’s note: in August, there was a widely publicized case of a father who stole diapers for his 18-month-old child].

People steal because they don’t have another choice. And because they’ve never stolen before, nor had contact with thieves, the police catch them easily.

Today, between 25 and 30% of Iranians suffer from mental health issues and need help. That’s the situation. And the economic, social, and political climate in Iran doesn’t leave much hope for improvement.

On August 5, Iranian President Hassan Rouhani announced a new economic plan to ease some of the hardship, without sharing any more details. A few weeks later, on September 14, after numerous debates around measures within the plan, Eshaq Jahangiri, the Iranian vice president explained that it had been canceled.