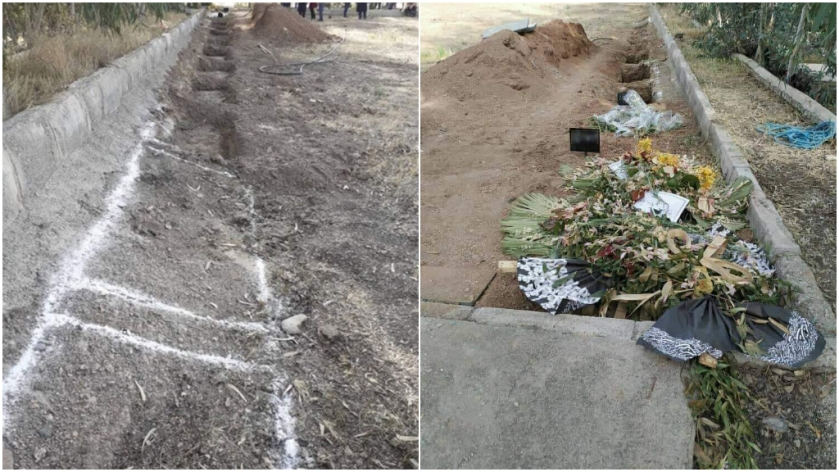 Members of Iran’s persecuted Baha’i community were shocked when, in April, the government announced that the only place they would be able to bury their loved ones was on top of mass graves containing political prisoners executed in the 1980s. Activists say this policy is an attempt by the government to erase any trace of the mass executions carried out by the Islamic Republic.

These photos, which were published on Telegram in April, show about a dozen freshly dug graves, two of which contain bodies, in an overgrown patch in Khavaran cemetery, located to the east of Tehran.

But the unassuming field is actually the site of mass graves containing the bodies of political prisoners who were executed in the years following the 1979 Islamic Revolution, the majority of them in 1988.

These photos show graves recently dug by members of the Baha’i community in Khavaran, a site that already contains mass graves from the 1980s. These photos were taken on April 23 and published on Telegram.

According to Article 13 of the Iranian Constitution, the only religions recognised by the Islamic Republic of Iran are Islam, Zoroastrianism, Christianity and Judaism. Baha’ism, which is a monotheistic religion, is considered illegal in Iran. Followers are persecuted and denied fundamental rights, including access to education and the ability to work legally.

“We refuse to do it. It’s an insult to both us and the prisoners from the 1980s”

We’ve struggled since the Islamic Revolution to bury our dead in a respectful manner. Our cemeteries have been systematically destroyed. Our tombs have been attacked and looted. Other bodies were moved from our cemeteries to faraway locations without our knowledge. The authorities even banned us from putting flowers on our graves because that was seen as promoting Baha’ism.

Since the Islamic Revolution, Khavaran has been one of the only locations where we are allowed to bury our dead. Back then, the cemetery was far from everything.

In the 1980s, the Islamic Republic started burying political prisoners in one of the fields in Khavaran. As a result, we don’t bury people in that part – firstly, out of respect for these executed political prisoners and their families and also because of our religious rules that say we shouldn’t bury people in a place that already contains bodies.

However, starting in April, local authorities announced new rules and restrictions that we just can’t follow. They said that we would have to bury our dead either in between existing graves or on top of the mass graves from the 1980s.

They’ve said this, even though there is enough room in other parts of Khavaran for us to bury our dead for the next 50 years. There’s not enough space in between existing graves and we don’t want to bury our friends and family on top of the mass graves. It’s an insult both to our community and the political prisoners from the 1980s.

We don’t know the identities of the two families who were forced to bury their loved ones in this location [Editor’s note: two bodies are visible in the photos posted on April 23], but we absolutely refuse the two options they’ve given us. Right now, there are a large number of bodies from our community that end up sitting in morgues, sometimes for weeks, while we try to find a respectful place to bury them.

We are in a very difficult situation that we’ve already reported to both the United Nations and the European Union. Over the past few years, many of our cemeteries have been destroyed. In 2013, our cemetery in Sanandaj was destroyed. Then, in 2014, the same thing happened to the one in Shiraz. In 2018, the one in Semnan met a similar end. The authorities are trying to do the same thing with Khavaran, I think.

Over the past two weeks, at least 12 Baha’is were arrested in Iran, which our Observer says is part of the growing pressure on this community.

I contacted the municipal council in charge of cemeteries in Tehran, but its members did not respond to our questions about the new regulations introduced in regards to Khavaran cemetery.

Raha Bahreini is a human rights lawyer who works as an Iran researcher with Amnesty International. She told the me about the history of Khavaran and what happened there in the 1980s:

On an almost daily basis, they would round up prisoners and bring them before “death commissions” which were made up of officials from the courts, the public prosecutor’s office, the intelligence services and the prison system. These “death commissions” were nothing like real courts and their decisions were made in a crude and extremely arbitrary manner.

They operated outside of the law. They weren’t concerned with actually establishing if the accused were innocent or guilty of any real crimes.

This photo shows one of the mass grave sites in Khavaran. It was taken by a family member of one of the deceased. The exact date of this photo is unknown. © © .

The Islamic Republic tries to keep it a secret how large these massacres actually were. But we believe that at least 5,000 political prisoners were executed only between late July and September 1988 in Iran, based on data from human rights organisations and political parties. We think that the real number must be much higher.

In a 2018 report, we concluded that these murders were a crime against humanity. The Islamic Republic has systematically hidden proof of these killing. By not officially recognizing that these people are dead, they continue to perpetuate the crimes they committed in 1988.

Our research has shown that Iranian authorities have deliberately destroyed suspected or confirmed mass grave sites associated with the 1988 massacre, like Khavaran, in an attempt to hide their crimes.

Over the past decade, Iranian authorities have bulldozed these sites. They’ve built buildings and roads over them. They’ve dumped garbage on them or allocated new burial plots on top of them. This has already happened to mass grave sites in Rasht, Ahvaz, Tabriz and Sanandaj.

These tactics are meant to destroy proof that could be used to establish the extent of these crimes and to obtain justice and reparations for victims and their families. Instead, they destroy these crime scenes so they can deny they happened.

Reza Moini is a Paris-based journalist with Reporters sans frontières (Reporters Without Borders). Four members of his family, who were members of the political opposition, are buried in the mass graves in Khavaran: his brother, his two brothers-in-law and his cousin.

In the 1980s, they started burying political prisoners who had been executed in Khavaran. First, one by one. So even though the graves were unmarked, families could find the place where their loved one had been buried. Sometimes, families would dig up the bodies in the middle of the night, just to make sure it was actually the body of their loved one.

In November 1988, the authorities told my mother that they had executed my brother and buried him in Khavaran.

Slowly, the families who went to visit the graves began to get to know one another and they formed an organisation called the “Mothers of Khavaran”. During one of these visits, on July 29, 1988, family members noticed shallow trenches where you could see bodies and bits of clothing because the bodies hadn’t been properly buried.

Because mass graves were used, no one actually knows the exact location where their loved one is buried here and, indeed, it is not even certain who is buried here at all. The only thing we know is that there are about 800 bodies or more buried in these graves, according to estimates of the number of political prisoners who were executed in prisons in Tehran, Evin and Gohardasht. At one point, Iranian authorities actually poured cement over the graves.

Even though they risked arrest or other forms of brutality, the “Mothers of Khavaran” would visit the graves every Friday. And on the first Friday in September, a large number of families would gather. But in 2008, the intelligence services banned access to part of the cemetery and the families aren’t allowed to go there anymore.

The wounds of these families are far from closed. We don’t know exactly what happened to our lost loved ones. We just know that they are buried somewhere in Khavaran. The authorities have even banned us from leaving flowers on the graves. We’ve been stripped of a fundamental right to cry for our lost family members. Now, Iranian authorities are trying to remove the last traces of these massacres.

Khavaran is the largest mass grave site in Iran. It’s not just a cemetery: it is a symbol of the evil perpetrated by the Islamic Republic. The authorities are trying to erase the remaining proof of these crimes. They are also trying to pit the Baha’i community against the family members of executed political prisoners, even though both are victims of the cruelty of the regime. The Baha’i community is standing up to this and I salute their resistance.

In a statement published on April 29, Amnesty International called on the Iranian government to halt the destruction of the mass grave sites and allow the persecuted Baha’i to bury their loved ones with dignity.